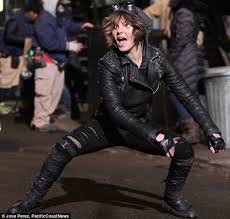 The second episode of Gotham, “Selina Kyle,” focused on street kids being kidnaped by people for the “Dollmaker,” a fairly recent addition to Batman’s rogues gallery in the comics. Apparently his career now reaches back before Batman’s own.

I found this to be an uneven episode, with some great scenes and some really odd choices. I’ll go with what I really liked first.

I think Gordon and Bullock had a fantastic rhythm this episode. They aren’t playing, they really are good cop/bad cop, and it’s being handled very well. There was a particularly brilliant interrogation scene, where Bullock refers to Gordon as “Saint Jim” that I thought was possibly the best scene of the episode.

There’s a scene with Selena being hunted on a school bus (it works in context), that evolves into a sort of deadly hide and seek. Given that Selena here is a kid facing an adult foe, I think it worked really, really well. Selena as Catwoman is a thief first and foremost, at least most of the time, and I think playing up her stealth was a good choice.

Edward Nygma, who goes on to become the Riddler in Batman’s time, is an interesting addition. He is apparently a forensic specialist with the police, which works very well with his fondness for solving puzzles, and later posing them as Riddler. He’s been in a short scene in each of the first two episodes, and I thought both were really nicely done of him. I think Cory Michael Smith is doing a great job playing the character.

I also am enjoying the scenes with Jim Gordon and Barbara Kean, played by Erin Richards. Barbara comes across as supporting Jim, and sharing his moral repugnance at the state of the police, but she’s her own woman. She acts decisively at one point in a way that has a big effect on the episode. We can see where her future daughter, Barbara the Batgirl, gets some of her determination to do the right thing.

Among the many other plots swirling around are the power struggle between Fish Mooney (possibly my favorite character on the show, certainly the most fun to watch on several levels) and Carmine Falcone, Detectives Montoya and Allen (important characters in the comics) looking into the “death” of Oswald Cobblepot, and Cobblepot himself on a murderous spree.

The Cobblepot story is one of the ones that isn’t really working for me. He seems to be working his way back to Gotham City from some great distance after his “death” and plunge into the river. How far away did the current carry him? He’s also a lot more ruthless and vicious than he’s usually portrayed. I guess he mellows with age. At the present, he seems to be camped out in a trailer he’s rented to consider his next move.

The depth of the corruption in Gotham comes up over and over. From a cop that leaves a murder scene to check in with a business that makes payments to him to Gordon and Bullock needing permission to investigate a crime in Fish’s territory, it’s a huge mess. Gordon and the Batman will have their work cut out for them later.

I had not realized until this episode that the captain Gordon and Bullock report to was Sarah Essen. In the comics, Essen is a woman Jim has an affair with, and later becomes his second wife. The character on the show so far doesn’t seem to be the same one at all. The comic book Essen is another good cop bordering on hero, the one on the show is part of the corruption. Yes, there’s lots of time for the character to change, but it seems odd to me.

There were mentions of the infamous Arkham Asylum a few times. Arkham is where Batman’s more colorful foes are sent for treatment. Or possibly more accurately, for rests between their escapes. At the time the show is set, it’s closed, but there is talk of reopening it, and the Waynes were supposedly involved in that.

I find it odd to say this about a show set in Gotham that deals with the Bat-mythos in depth, but there is one change I’d make were I in charge: I’d cut the scenes with Alfred and Bruce Wayne. I’ve heard many people say they are not happy with Sean Pertwee’s portrayal of the famous butler, although I’m not sure if that’s the fault of the actor or the script. Alfred inviting Gordon to come see young Bruce was an odd scene, especially when Alfred said for “tea time.” Because every big city cop in America knows when tea time is?

Bruce is being depicted as more or less mentally ill. Yes, there have been comments about Batman being crazy for a long time, but seeing an eight year old engaging in self-harm and possibly OCD issues is disturbing. Nothing against David Mazouz, I liked him on Touch, but his Bruce just isn’t doing much for me.

In fact, I think the scenes with Bruce and Alfred don’t really add anything to the show. The scenes, to me, feel shoehorned in. Do we need to see Bruce playing “How much can I burn myself” or Alfred being worried about his charge? Are they just trying to tie Bruce and Jim closer?

Overall, I’m enjoying the show. I love Bullock with Gordon, Fish is delightfully evil, and Barbara  Kean and Ed Nygma are good supporting characters. I think this show can work well as a cop drama set against a corrupt city. The Batman elements can be used for flavoring. But, while I’m surprised to find myself thinking it, this Gotham needs less Bruce Wayne and Alfred.

I also say that, for an episode named “Selena Kyle” the title character didn’t get a lot of screen time. I found that odd. But then, I find many choices on the show a bit baffling, as I mention above. I’m sticking with it, but hoping for improvement.