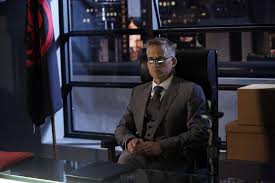 Agents of SHIELD goes for another clever title with “A Hen in the Wolf House.”  It works fairly well, all things considered.  They do manage to advance and alter several plot lines, which I appreciate.  Too many shows drag things out far too long, and some resolution here is a really nice change of pace.

Much of this episode focuses on Gemma Simmons and her infiltration of Hydra.  Again, I’m doing my best to avoid spoilers, but there are a few surprises along the way.  It was nice to see more of Simmons (the real one), and even better to see a new character I’ve been a fan of for a long time.

There’s a fair amount of tension between Skye and her mentor/hero Coulson, which I can understand.  He gave her a very tough assignment and withheld information she needs to do it.  Add in the whole thing being tied up with the ongoing mystery about Skye’s father, and there’s a lot that could go wrong there.

What appears to be the season’s big bad, Daniel Whitehall, immortal (or at least very long lived) Nazi, keeps lurking around the edges of things.  Whitehall is being played very creepily and well by Reed Diamond, and he makes a good menacing villain.  He’s not overtly violent like many, but I find myself believing that he could probably do anything and not really care about it.

Fitz also made a good bit of progress this episode with his various injuries and trauma.  Iain De Caestecker is doing a great job playing Fitz’s difficulties.  My only quibble is with the timing of his progress with some of the events of the episode being a bit too coincidental.

Raina, the infamous Girl in the Flower Dress, is in somewhat desperate straights, and makes a pest of herself to Coulson.  She has some decent blackmail, but seriously underestimates Coulson.  While Coulson is usually an amiable guy,  it’s nice to see him as a badass.  He gets some great lines while dealing with Raina.

Apparently, the Obelisk from the season opener is something Whitehall is desperately interested in, and will go to great lengths to get it.  This has some connections to other things in play this episode, and they actually tie them together pretty well in my humble opinion.  There were a few surprises along the way which I didn’t see coming, like tying it back to Skye’s origins.

I won’t rave about the new character revealed in the episode.  I will say I was excited when I first heard the rumors, and think they executed the character quite well.  The role they played here was nicely done, well cast, and tied in to some things from earlier this season.

The end of the episode shows an alliance forming between two of SHIELD’s foes.  Not only does SHIELD have some problems coming their way, but both players involved seem to have a grudge against Director Coulson himself.  As if SHIELD didn’t have enough to worry about being labeled as outlaws and terrorists.

SHIELD is continuing to be a much better show this season, and I’m enjoying the change.  I’m very excited about the new character, and potential connections elsewhere in the Marvel on-screen universe.  And I’m very glad of the improvement in the overall quality.