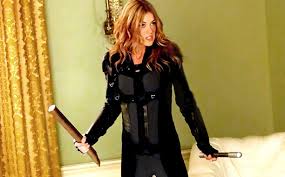 This week, the Agents of SHIELD deal with “A Fractured House.”  Hydra ups the stakes, framing SHIELD for a brutal attack, and focusing the media and law enforcement on them.  All Coulson’s careful work trying to reach a good working relationship with Talbot, the most visible person tasked with hunting down SHIELD in the wake of the events of Captain America: Winter Soldier is now in danger at best.

Coulson spends a lot of this episode doing damage control, trying to reach out to people who can influence public perception.  He ends up meeting with a Senator who proves to have a surprising connection to SHIELD and Hydra both.  While Coulson is playing politics, Skye has more Lecter/Clarisse sessions in the basement with Ward, who she and Simmons were watching work out earlier.  Ward gets a lot more screen time this episode.  Personally, I was done with him when he proved to be a traitor last season.  I’m not enjoying this back and forth with Skye at all.

Even with things looking so grim for SHIELD, the various personal relationships receive a good bit of focus.  Hunter and Morse try to work together, not easy after what seems like it was an ugly divorce.  Their verbal sparring is amusing, made much better by May’s eye rolls.  When the team goes into action against one Hydra group, I loved that Hunter was the distraction while the two kick-ass women got in place to take out the unit.  There’s a nice role reversal.

While all that is going on, there’s still a lot of tension between former best friends and brain trust Fitz and Simmons.  In a well done contrast, the imaginary Simmons kept helping Fitz with his minor aphasia (the word problems he’s having), where the real one keeps making thing worse.  Fitz is working a lot better with Mac these days than Simmons, and she seems both relieved and a bit stung by that.  I’m hoping that soap opera doesn’t linger all season.

The show changed several things.  Talbot, by episode’s end, appears to have a lot more respect for SHIELD.  He has a nice scene with May about SHIELD’s recent losses.  Also, several things change for Ward, at least one of which many of us have been predicting since last season ended.  And they show us that at least one other person besides Coulson and the late Garret is doing the weird alien writing.

What I liked: May is a force of nature when she’s unleashed, and her fight with the leader of the assassins was GREAT.  Morse is another great fighter, and I’m hoping she eventually makes the transition to her costumed comic book self.  Morse also mentions something about Barton this episode, which was both a good tie to the Avengers and maybe a nod to the tie between the characters (they were married in the comics). Hunter, while serving as a distraction, is also shown to be competent.  Simmons is still royally and understandably pissed at Ward.  The conversation between Simmons and Mac.

What I didn’t: What happens with Ward near the end everyone saw coming.  Trip, who is supposed to be a bad ass field op, keeps sitting at a desk.  Skye’s father, after being such a big thing last episode, is largely dropped.  And seriously if SHIELD is this badly outgunned and out-manned, why are we seeing and hearing nothing about Deathlok?

This was a better episode than many have been.  SHIELD is one of those shows that tends to be a bit erratic.  I’ll give this one a 3.5 out of 5.  And I’m very excited about the Avengers trailer and the Agent Carter commercials.