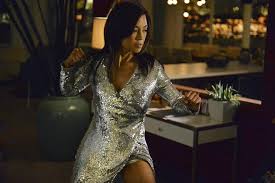 Agents of SHIELD is continuing to be very clever with their titles.  “Face My Enemy” works on several levels for this week’s episode, which I thought was one of their better ones.  To me, this one felt more like a fun spy caper, which is at least some of what I was hoping for from the series in the first place.

We’ve seen a lot of this strange alien language that looks a lot like the old computer flow charts to me.  Now, it’s popped up somewhere new, and both SHIELD and Hydra are after it.  This is almost a Mission Impossible type of episode, with undercover work, impersonations, and some amusing situations.  Coulson and May get sent out to find the artefact of interest, and get a lot of unexpected twists and turns along the way.

The rest of the team isn’t left out of the action, although they probably wish they had been.  An impostor infiltrates the Bus, as they call their high-tech plane, and turns it against them.  In addition to throwing in some drama and excitement, these sequences also show Fitz making some significant progress in recovering from his injuries, which I really enjoyed seeing.  The imaginary Simmons is even pushing him to do better.  I suppose that makes sense, as she’s a part of his mind after all.

The impostor issues get really interesting here.  There’s an incredible fight between a real SHIELD agent and their doppleganger with some really nice moves.  The method of imposture is nicely done, too, as it apparently makes use of something we saw in Captain America: The Winter Soldier.

I thought this was a pretty solid episode.  There were surprises, teamwork, humor, and some nice high-tech gadgetry.  Coulson and May reveal a lot more of their history while dealing with current issues.  Yes, this is frequently the requisite, “I’ve mentioned some trivia to later trip up the fake,” plot trope, but it was handled well and gave a good feel for their past cases.

I had fun with this episode, it advanced several subplots, and had some entertaining scenes.  The show has had problems in the past, but this was nicely done.  If they can stay at or above this level of quality, I think some of the people with doubts about the series may come around.