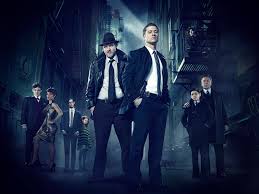 Gotham, the new series on Fox, finally premiered after a lot of anticipation.  Billed as the pre-quel to Batman, it starts with the Wayne murders, which started Bruce on the path to the Dark Knight.  Much like Smallville focused on Clark Kent’s glossed-over high school years, Gotham is set in the wake of the deaths of Thomas and Martha Wayne.

The focus of the show is on rookie detective James Gordon, a long way from his days as Commissioner.  Drawing on the background created by Frank Miller in his “Batman: Year One” story, Gordon is a war vet.  He survived the war, as did his idealism.  As the show starts, Gordon has just made Detective.  The Gotham City Police Department is a corrupt mess, and Gordon is not fitting in with it, which speaks well of him.

While there are many ties to the Batman mythos, I’d argue this isn’t really a Batman show.  We’re long before Bruce dons the cape and cowl, and while there are a lot of familiar names, none of them have donned costumes yet.  It’s a crime drama, after a fashion.  Gordon is dealing with a looming gang war, a compromised police department, and a promise he made to young Bruce Wayne.

The Batman supporting cast showing up adds flavor, but also comes with some difficulties regarding storylines.  Every name comic book fans (like me) recognize comes with a host of limitations.  We know Oswald Cobblepot won’t die before he becomes the Penguin, etc.  The only new major character so far is Fish Mooney , played delightfully by Jada Pinkett Smith.  She’s wonderfully vicious, a menacing presence in a stunning dress.

They are exploring some of the unknown aspects of the characters.  Barbara Kean eventually becomes Barbara Gordon in the comics, later mother of another Barbara, better known as Batgirl.  Here, it’s strongly hinted that Barbara has a romantic past with Detective Rene Montoya.  Montoya was a comic book character, known as both a tough Gotham detective and a strong gay character, which are not as common as they should be.  I suppose this means Barbara is bi, which is an interesting twist.

We see quite a few of the people who will become Batman’s rogues gallery.  The one that surprised me the most was Edward Nygma.  In the comics, he’s the brilliant villain the Riddler.  Here, he appears to work for Gotham PD’s Forensic’s Unit.  One thing this show seems to be establishing is that all of Batman’s major male foes are many years older than he is.  Bruce is child (his age at the time of the murders in the comics is usually eight), while Penguin and Riddler are both adults.  Catwoman and Poison Ivy both seem to be the same as young Bruce, give or take a year or two.  Selina, later Catwoman, is a street kid and thief; Ivy is the young daughter of a man killed by a plot involving both GCPD and the mob.

Gordon’s partner in the series is Harvey Bullock.  In the comics, he’s a slob and a man of very questionable reputation at times.  Here, he’s a corrupt cop.  He’s part of the system, bought and paid for.  He did show a spark of being a good cop when he tried to help Gordon out of a lethal situation, although that didn’t work out well for either of them.

Just like the CW’s Arrow, there are a few little Easter Eggs thrown in for comics fans.  A street address mentioned at one point was on “Grundy.”  Solomon Grundy is a long time DC villain, often clashing with Batman among others.  There’s also a stand up comic auditioning in Fish Mooney ’s club.  Of course, Batman’s best known foe is the Joker.  Is the comic him?  No way of knowing yet, but wondering about things like that are a part of the fun.

This is certainly a grim show, but that’s fitting for Gotham.  It’s always been a dark city.  Watching the writers dodge between elements of Batman’s past is going to be interesting.  Since the show is on Fox, it won’t be connecting to any of the other hero shows on the various other networks this fall.  While making for less promotional opportunities, it also allows for more freedom with the plot.

I thought this was a well done start.  I’m intrigued.  I’ll certainly be watching a few more episodes.  But then, I’m very much a fan of Batman, and DC Comics characters.