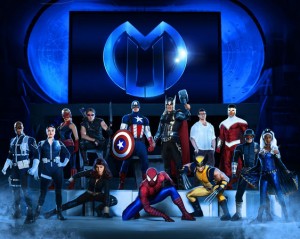 I am coming into this review from two different perspectives, so let me get some background established here.  I’ve been reading comics since the 1980s.  I’ve talked about them, written about them, played superhero-themed games, and watched the shows and the various movies.  I am an unabashed hero-geek.  I’ve never claimed otherwise.

I’ve been working technical theater at a professional level since the late 80′s.  I have seen hundreds of shows, concerts, etc.  “Jaded” might be fair.  I won’t say I’ve seen it all, but I’ve seen a lot.  What’s a special night out for “normal” people is another day/night at work for me.  Live-action adaptions of cartoons/tv shows tend to pretty bad, and dreaded by many stagehands.

So which side wins out for Marvel Universe Live?  I have to admit I was impressed.  Before I get to all the good stuff, I’ll deal with the one negative I noted for the show.  Some of the writing was pretty bad.  Captain America literally spends his off time helping old ladies across the street.  The coolness of one special effect of Thor’s Mjonlir returning to his hand was undercut by his holding it up and yelling, “It’s hammer time!”  This was a bit weak, at the very least.

That to one side, they did some amazing work.  The special effects were great.  The Hulk, part puppet, part stilts, part performer, was massive.  I’m 6’2 and I didn’t come up to his shoulder.  The fight choreography was decent, if a bit brutal by kids’ show standards at times.  The range of the characters was nice.  It was mostly the cast of the Avengers Assemble cartoon (think the Avengers movie with Falcon added), plus Spider-Man, Captain Marvel (Carol Danvers), Wolverine, Cyclops and Storm.  You could argue that having Storm and Thor in the same show would be redundant, but she and Cyclops spend most of the show as captives.  Hmm.  Just like Cyclops did in X-Men 2.  There’s a pattern forming here.

The plot is fairly simple– it revolves around the Tesseract/Cosmic Cube as seen in the Avengers movie. Loki still wants it, and a lot more villains get dragged in along the way as well.  There is one scene with Tony Stark, Pepper Potts, and Peter Parker as things kick off.  They did a great job making the actors look like their movie counterparts.  The characters, best I can tell, are voiced by the cast of the Avengers Assemble and Ultimate Spider-Man cartoons.

Basically, it’s a fun show.  For hero fans like me, there are a lot of well known characters from comics and movies.  There is action, special effects, and motorcycle stunts to keep the attention of younger viewers.  As I said, some of the fighting might be a bit rough for the very young.  Wolverine makes a lot of use of his claws towards the end of the show.

I was surprised at how much I enjoyed this show.  It’s arguably a kids’ show, and, as I said, I’m a bit jaded on live performances.  The costumes and special effects were very well done.  It was a nice surprise to see the comic book version of Falcon’s costume (much as I loved Winter Soldier) and Captain Marvel, who hasn’t made it to the movie screen yet.  Even Nick Fury and Maria Hill show up.  The only notable absence from the movies and cartoons is Phil Coulson.

Short version– it’s a highly entertaining performance, aimed at kids, but enjoyable by adults, especially if they are comic book fans.