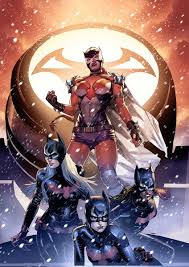 I really had no intention of buying any of the “Futures End” stories.  One of my objections to the “DCNU” as many call the rebooted DC Universe, is that it’s a very dark, grim, foreboding place.  That has a place, and works wonderfully well for Batman, Dr. Strange, or the Punisher, but as a line-wide trend, it’s not something I like.  When the Futures End promos started coming out, they talked about a darker future for the DC heroes.  Since it was already darker than I wanted, I decided I would pass.

I made the mistake of mentioning that on Twitter.  To my surprise, both Bryan Q. Miller and Gail Simone told me that I should really give the Batgirl issue a try.  Miller wrote the Steph Brown Batgirl, one of my favorite versions of the character, and Simone is in general one of my favorite comic writers.  If both of them were recommending it, I guessed I’d give it a shot.

I’m very glad I did.  Gail Simone managed to sneak a ray of light into the “dark future.”  Several things fans have been complaining about since the reboot happened are addressed in this issue.  We see the return of some beloved characters, and some favorite versions of others who have been in the DCNU.

Avoiding spoilers, I’ll just say that there are some wonderful surprises.  Barbara is here, and she’s gathered a team around her.  She suffers a tragic loss as the story starts, and, in those first few pages, I wondered if I’d made a mistake.  But, since I’d already bought it, I pressed on.

Would you believe there’s a League of Batgirls?  I wouldn’t have, but that’s what we get by the end.  Two characters I really enjoyed in the role, plus another who seems to have a lot of potential, are working as field agents for a shadowy figure, a bit like a cross between Charlie’s Angels and Birds of Prey.  We get to see who this Bette Noir is, and how she got that way, and what became of Barbara after she made a really questionable choice in mentors.

As an aside, the “Bette” name may be a tip of the cowl to another character.  Bette Kane was the original Bat-Girl, back in the Golden Age of comics.  She later became the reserve Teen Titan Flamebird, and most recently was revealed to be Kate (Batwoman) Kane’s cousin.  Bette went through some rough times in the Batwoman book before gaining yet another new identity, Hawkfire.

Gail worked some magic here.  I bought the issue reluctantly and I think it was my favorite of that week.  It was great seeing these ladies together again.  I know that Futures End is yet another possible future, the comic equivalent of “Christmas Yet To Come.”  Most of what I’ve seen of Futures End I’d be fine living without.  But I dearly hope we get to see these Batgirls again, all of them.

I loved the issue, and I recommend it to anyone who has ever been a fan of any Batgirl, or even just those who like strong female leads.  It was a welcome surprise by a talented writer. Javier Garron turned in some very fine art, as well.

Oh, and my thanks to Gail and Bryan both for convincing me to get this, and for many years of great Batgirl stories.