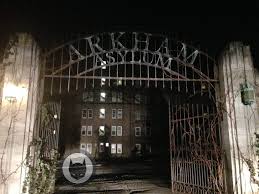 Here there be spoilers, read at your own risk.

One of my concerns about Gotham was that the cast seemed a bit big to really be workable.  They are handling this by rotating various characters out for different episodes.  This week, Selena gets a vacation while Gordon and company deal with what’s shaping up to be a major gang war.  Selena being out makes sense, that’s not really her area.

What we do get in “Arkham” is a lot of set up for what looks like it might be a really ugly situation.  Apparently, Arkham here refers not just to the infamous Asylum, but a whole area of the city that’s up for redevelopment.  Of course, major urban renewal means major money, and both the Falcone and Maroni gangs want their share.

As if the two major gangs squaring off wasn’t enough to make trouble, there are two wild cards in the mix.  Gordon of course is determined to not let the gangs go to war, spurred on even more by a bit of a guilt trip from young Bruce Wayne.  On the other hand, Oswald Cobblepot is back in town, and he’s taking his own steps.

This week’s killer didn’t really thrill me.  I have no idea who, if anyone, he’s supposed to be in Batman lore.  He has an irrational attachment to a spike-like killing device, which he uses whenever possible.  I’d be tempted to make a wisecrack about doesn’t he know there are guns, but he does use one eventually.  Maybe his obsession with his signature weapon foreshadows all the weird foes Batman will fight in the future?  There’s something in Gotham that twists people to favor a trademark style?

I’ve been enjoying the short appearances of Ed Nygma, the future Riddler.  He’s played well, and he’s very much in character, always believing himself to be the smartest man in the room.  While I enjoy all that, the scene he was in this week was badly done.  It didn’t flow as well as the others, and they make a lot of use of the word “paradox” which they don’t use correctly.

Bullock and Gordon end up working the case, which involves City Councilmen being abducted and killed.  They are still far enough apart that I don’t even think “grudging respect” is the right term, but their different methods are very complimentary.  The tension between their points of view is one of the better parts of the show.

Speaking of tension, Gordon and the lovely Barbara Kean are having problems.  Yes, Gordon is keeping things from her, and she from him.  She does finally tell him both that A) she’s bi and B) she used to be with Montoya.  Personally, I’m not sure I’m getting why he can’t tell her, “Hey, I had to fake a man’s death to prevent the AMAZINGLY crooked cops and gangsters from killing him, me, my partner, and maybe you.”  Irrational secret keeping seems to the hallmark of many of today’s shows, and this is one of them.

The end result of the gangs pressuring the mayor and each other is a compromise no one really likes.  Maroni is going to make money, but not as much as he’d hoped.  Falcone lost prestige.  Fish Mooney is off in the shadows scheming and hiring a new employee in a way that makes “The Apprentice” look like, well, the foolishness that it is.  Young Bruce is also unhappy about the compromise, which undid some of his parents’ last big project before their deaths.

One thing that did impress me this episode was Cobblepot.  Robin Taylor is playing the Penguin-to-be very well.  He’s ruthless, vicious, and deadly, as well as easy to underestimate, just like his comic book counterpart.  His plottings are very important to this week’s episode, and he pulls a few surprises I didn’t see coming.  He’s positioning himself to learn a lot about the mob, weakening both sides, and amassing money along the way, while making himself look good.  It’s a nice bit of both writing and acting.

That said, the episode focused mostly around the gangs, and that’s just not what I’m interested in.  I am hoping the show, which has been picked up for a full season, doesn’t devolve into “Gangs of Gotham.”  I thought the show started strong, but this wasn’t a great episode.

I’m still going to be watching, and at this point, hoping for improvement.  The show seems to be on a slight downward slope, and I’m really hoping that doesn’t continue.