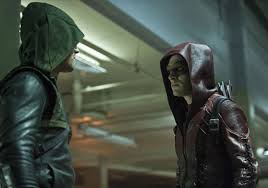 Minor spoilers below, be warned

“The Calm” is the somewhat ominous title of the season three premier of Arrow.  Presumably, this implies “…before the Storm.”  The show opens with Team Arrow working together very smoothly to take down an arms shipment.  As a general rule, when something goes that well for the good guys on this kind of show, it’s a setup.  It was nice to see Roy in costume with a bow, like his comic book version started off as Speedy, Green Arrow’s sidekick.

As the mission comes to a successful end, we also get mini-status updates on the lives of our heroes.  While they beat Deathstroke last season, that doesn’t mean everything is going well for them.  Oliver has lost his company, which means Felicity lost her job, too.  Oddly, this doesn’t seem to be effecting Diggle, which they don’t explain.  Felicity now has a day job, and it’s pretty amusing watching her deal with it and juggle her responsibilities to the team.

One of the cliffhangers from last season was Quentin Lance doubling over and coughing up blood after helping Arrow and company.  Now, he’s back as a Captain, and makes a nice speech praising the Arrow and disbanding the task force that was going after him.  It was a nice little scene, but it shows whoever does the writing knows nothing about how law enforcement works.  If you have a chronic disability (and Q seems to have two, the cane and the heart problems), you can’t wear the uniform and they’ll start the paperwork to have you medically retired.  Oh well, the writers have been consistently screwing up detail about police, why stop now?  Oh, and from Detective to Officer to Captain, skipping Sergeant and Lieutenant?  Not likely.

One of the new characters this season is Ray Palmer, who is apparently taking over Queen Consolidated.  In the comics, Palmer is the alter ego of the Atom, who gets called on by fellow heroes for his scientific genius almost more than his shrinking powers.  Palmer is being played by Brandon Routh, which makes another first as far as I know.  Routh played Superman in Superman Returns, so this is the first time an actor has played two different DC heroes in live action.  Yep, geek trivia.

One of the challenges of doing a show based on Green Arrow is that, despite being around since the 40′s, the character just doesn’t have an impressive rogues gallery, like Superman, Batman, or Flash.  We’ve seen a drug dealer calling himself the Count, selling a drug called Vertigo, based on one of GA’s few foes, Count Vertigo.  The Count is dead, and now someone knew has arisen calling himself Vertigo. He is the episode’s main antagonist, and does improbably well against the supposedly well-trained Arrow.

Something many fans have been clamoring for sort of happens, as Oliver and Felicity actually go on a real date.  Not a diversion, a scheme, an actual date.  Suffice to say it goes badly (like RPG into the restaurant badly), and Oliver retreats into the trope of “My life is too dangerous to let me have a love life.”

Captain Lance (still called Detective by the Arrow folks, just as he was when he was busted down to Officer) is occasionally helping the team in the field, which is not a good idea with his health issues.  Speaking of the Lance family, we get a few more surprises with them.  Laurel seems like she’s actually going to be likable and useful this season, which is a nice change from shrewish and/or addict.  Then we even see Sara come back just in time for Canary to lend Arrow a hand.

The big showdown this episode is at a boxing match where Vertigo hopes to eliminate all his rival crime bosses, and kill a lot of innocent people along the way.  The team goes into action, and the writers throw us another hint of things to come.  In DC Comics, if you touch at all on boxing, you usually end up running across Ted Grant, who is a street level hero called Wildcat.  Well, one of the shots of the ring shows guys in jackets with “Wildcat” on the back.

The team wins in spite of a lot of bad breaks.  You know it’s a bad day when bomb defusing goes awry.  Also, Arrow cleverly decides the best policy to deal with Vertigo’s new drug, which seems to work like Scarecrow’s fear gas (a Batman foe) is to stand there and get hit by it.  Interesting…

There’s a big surprise at the end of the episode that not only did I not see coming, I hadn’t heard any whispers about.  It truly was shocking, and I won’t spoil it here, but I will say it will probably have repercussions through out the entire season, maybe beyond.  I didn’t like it, but I can see, I think, why they did it.

The flashbacks continue, just on a new island.  We see flashes of Oliver in Hong Kong, forced to work for Amanda Waller, and more supporting characters introduced.  I suspect Oliver has a new mentor.

I liked that they brought in Ray Palmer, although I’m not sure about this version.  He seems a bit more ruthless than the good doctor has ever been portrayed.  I’m curious to see what they do with him, and if his costumed identity will eventually show up. Same thing for Ted Grant/Wildcat for that matter.  The also did a nice little nod to the newly debuted Flash tv show, as Barry calls Oliver for advice.

I didn’t like how they handled Quentin.  He seems to be needlessly reckless, and the writers clearly don’t know how police actually work.  I also don’t get Arrow standing still to get drugged, Vertigo’s really impressive hand to hand skills, or his cryptic warning at the end that Arrow gave the Vertigo name power.

I’m not wild about the ending, but I think I see where they are going with it.  It wasn’t the greatest debut, but I’m curious enough to see how they handle the plots they’ve started.  I’ll be sticking around a while.