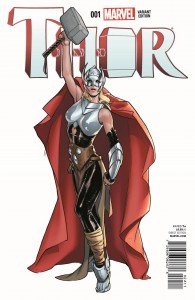 I have been a big fan of Jason Aaron’s run on Thor: God of Thunder. He took a god and gave him a story that was, to use an overused word correctly, epic. I was impressed by the entire run, which doesn’t happen too often. So when I heard it was coming to an end, I was annoyed. When I heard it was ending for what sounded like a publicity stunt, I was even more irritated. A female Thor the same month we get a new Captain America. I had a lot of doubts.

I got it partially out of curiosity and partially out of appreciation of Aaron’s talent. The man is very good at what he does, and has a good grasp on the scale appropriate to the God of Thunder. And then the book got another strike against it right off the bat. The situation that leads to Thor’s replacement spins out of the “Original Sin” crossover, and I’m really done with crossovers. I didn’t get that one, so I didn’t know what happened, and was mildly annoyed.

Something or other has happened, what they don’t reveal precisely. Not only is Thor suddenly not worthy to lift Mjolnir, but it won’t “listen” to Odin either. I don’t think that’s ever happened before. Thor is camped out on the moon, and struggles with the hammer, while the hosts of Asgard look on. It could be comic, but it ends up being tragic, another tribute to Aaron’s writing.

Odin, long missing, recently returned in the Tenth Realm series, also by Aaron. As Thor struggles, Odin and Freyja bicker about who leads Asgard (which they keep calling Asgardia. I don’t know when that change kicked in, but I don’t like it). Another crisis emerges, and Thor and the rest finally leave. Mjonlir is left alone on the moon.

A shadowy figure says “There must always be a Thor,” and then a female hand picks up the hammer and turns into, well, a female Thor. This, of course, leaves us with a lot of unanswered questions, like “Who the heck is this?” and “How’d she get to the moon?”, among others.

I was dreading something silly. I didn’t get that. Jason Aaron is a very skilled writer, and I’m curious. Russell Dauterman, who I am not familiar with, did some gorgeous art on this book. It’s truly beautiful. And I must say, while I usually don’t care and don’t even really notice such things, the new cover logo is very nicely executed.

I find myself buying into the premise for now. I want to know what happened to Thor, and yes, I’m rooting for him to get Mjonlir back. But I’m willing to go along for the ride. I want to know who this woman is. Thor has been “replaced” twice before, and always come back. I’m betting he will this time, too.

I’m glad that, from what we can see, Thor is no less heroic. He apparently will keep fighting, even without his signature weapon. I’d be annoyed a lot if he just faded away. I’m hoping that the prior replacements, Thunderstrike and Beta Ray Bill, at least get mentioned in here somewhere. It’s going to seem really odd if they don’t, since they, too, managed to lift Mjonlir.

All that said, I don’t think it was a flawless tale. I don’t mind a female character with the power of Thor, it can be done well. I DO mind Thor’s name being passed on. It’s a name, not a title. Sam Wilson becoming Captain America is one thing, since he’s around the eighth one. But that’s not the same thing.

I also wasn’t wild about Odin and Freyja bickering like, well, an old married couple. They are one, I know. I get it, and Aaron makes the gods more believably human. But something about that was just wasn’t sitting right with me.

I’m intrigued, and I have faith in Aaron at this point, so I’ll be following this story. When the gods are involved, not even the sky is the limit.