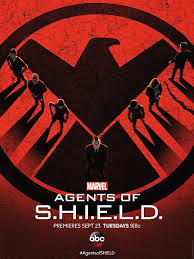 Caution, there be mild spoilers below.  Read on at your own risk, etc.

“Heavy is the Head,” is the second episode of the current season of Agents of SHIELD.  It picks up right where the cliffhanger from last episode ended, and leaves a few characters in a lot of trouble.  There’s also the issue of the Absorbing Man on the loose, although here they just use his name, Creel.

One thing I found a bit confusing about this episode was the personnel issues.  At the end of last season, SHIELD was pretty much just Coulson’s team.  That was it.  Now I know they’ve been trying to get some help, whoever in SHIELD didn’t go over to Hydra, but it seemed to me like they had a lot more people suddenly in the second episode.  That struck me as a bit odd.  Maybe all the extra agents came with the new base they call the “Playground,” but it isn’t really clear, at least not to me.

Many of the scenes set up what are likely going to be ongoing plots for the season.  Talbot is playing Ahab with SHIELD as his White Whale.  For whatever reason, he is so convinced they are the bad guys that he won’t begin to consider that he might be wrong.

Fitz is still recovering from injuries he suffered last season.  He has some kind of lingering brain damage, and his fight to get his brilliant thoughts out is hard to watch.  Ian de Caestecker is doing a great job with that performance.  He’s still hallucinating his former teammate, Simmons, and she seems to be giving him bad advice.  The hallucination almost seems to have some of her specialized knowledge, which is occasionally making me wonder if this is more than just brain damage.  Then again, last season they did a really bad job of keeping their fields of study separate, so this may be more of that.  At times, they didn’t seem to quite grasp the difference between the biologist and the tech genius.  Fitz later gets some help from Mac, another new character who is working with the reduced SHIELD in their science section.

Coulson is also keeping secrets about his own condition.  Whatever was done to him to bring him back after his death in the Avengers movie is still having repercussions, and he’s doing his best to hide it.  That makes a degree of sense, with Coulson now being the Director of the embattled and on the run agency.  May is in on whatever it is, and his helping him both keep it hidden and figure it out.  Ming-Na Wen’s May is a great bad ass, and one of my favorite parts of the show.

Raina, the Girl in the Flowered Dress, who was an antagonist much of last season, is back again.  She manages to survive an encounter with Creel, and then offer Coulson help locating the villain.  As far as I can tell, she’s still working with the Centipede group from last season, and isn’t Hydra at least.  The end of the episode shows her touching the mysterious Obelisk that Creel stole and she tricked away from him.  It glows and then shows weird symbols, that look a lot like the ones Coulson has been carving in his fits of… whatever it is.

Creel, who I thought might be a season-long problem, is dealt with due to some clever maneuvering.  Hunter, one of the mercenaries introduced this season, also gets a lot of screen time.  He’s not a favorite of mine, but he’s fairly realistic as Coulson and Talbot both try to sway him to their side.

I’ve heard rumors about other characters slated to appear this season, and I’m looking forward to them.  SHIELD on the run is an interesting idea, sort of forced on them by the events of Captain America: The Winter Soldier.  I do very much like that, as they are trying to stay out of custody, they are still carrying on with their mission of helping people.  To me, that’s part of what makes them heroes, not just fugitives.

They manage to steal a jet back from their impounded armory, and that gives them several useful edges.  More firepower is good when you are so hugely out-manned and out-gunned.  The captured ship also lets them perfect a cloak for “the Bus” as they call the big plane they used as a headquarters season one.  A nice nod to fans, the stolen aircraft is called a “quinjet” which is the name in the comics of the special ships the Avengers fly around in.

They have a lot of interesting plot lines to work on this season.  SHIELD as heroes on the run, sort of like a higher-tech, better organized A-Team, lends itself to a lot of drama, as does Talbot’s obsessive hunting of them.  Coulson’s condition is a mystery that will keep the fans talking, and cause worry on his team.  We also don’t know yet what happened to the real Simmons, although that looks to be coming up next episode.  And there’s still the matters of Skye’s origin and Ward, their traitor/prisoner.

I enjoyed the episode, like how things are being handled, and think there’s a lot of potential in this show.  I’m certainly sticking around to see what comes up next.