Our specialized essay freelance writers will aid you to out directly on time. We are able to assure that rapid essay blogger method not alone very rapidly and bang in a timely manner do the trick but probably relevant and taken care of experience write my essay online 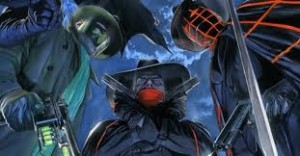 I’ve spent a lot of time in my various reviews ranting about crossovers. So, why am I now really happy about one? Well, Dynamite Comics’ “Masks” is more a miniseries than a crossover for one. The difference being Masks, as far as I am aware, is self-contained, and not spilling over into various issues of other titles with “PART OF….!!!” plastered on the covers. It also brings together several characters I’ve always had a fondness for: the original Green Hornet and Kato, The Shadow, and, somehow, Zorro, as well as one I don’t know much of, The Spider. I admit, when I first saw the lineup, I was wondering how some more or less 30′s era characters were teaming with Zorro, who’s from the 1800s.

The series is set in New York, home to the Shadow and Spider. Shadow and the Hornet and Kato have a run that goes poorly, but the meeting set up later for their alter egos goes better, as Lamont Cranston welcomes Britt Reid to the Cobalt Club and they talk. The New York police are revealed as corrupt, as illustrated by a scene witnessed by Kato. He sees two cops arrest a man for “vagrancy” because they are below quota. The man protests, saying he’s in from California to get work as an illustrator. He drops his artwork as he’s hauled off for being a “beaner,” and Kato and Reid pick it up. Kato’s comment about “If the law is unjust, then the justice must be an outlaw,” is layered nicely over the sketch of El Zorro, signed by Rafael Vega. The original Zorro was Don Diego de la Vega, and I suspect we are going to learn this is a descendant. The miniseries “Death of Zorro,” also from Dynamite, a while back made it look like the Zorro identity was going to become a legacy.

The main thrust of the book is like a dystopian nightmare, after a fashion. The so-called “Justice Party” gets elected to start ruling in New York, and they go deep into ugly places right off the bat. Masked “cops” who enforce new taxes on the poor, jailing those who can’t or won’t pay. The first issue ends with the Hornet, Kato, Shadow, and, after a bit, the Spider, banding together to fight the fascists who are imprisoning the poor.

Masked men fighting fascist oppression, corrupt law makers, and crooks is why a lot of these characters were created in the first place. It fits perfectly for the Hornet and Shadow. And let’s not forget, Zorro was born to fight the injustice of the corrupt government of Spanish California. Dynamite had already established that the Lone Ranger and Zorro were in the same world, and the Ranger and Green Hornet are related, so them all being together makes sense. I’m very much looking forward to a “modern” (ok, 1930′s) Zorro showing up.

Add in some pulp heroes I’ve enjoyed for a long time, a great team up, and a huge threat, and I’m interested. Then put the amazing Alex Ross on the art, and I’m sold. Masks looks like it’s going to be great. I really enjoyed the first issue, and can’t wait for the rest.research paper writersterm papers